Pascal is the head of the leading growth at wallet engine. The co-founder of verso finance. He is also the co-founder and managing partner of P&W advisory raised in Germany (near Frankfurt). He studied finance econometrics data science in that direction and even for these studies, he was always interested in entrepreneurship and startups. Pascal first started off with a corporate job at Daimler Mercedes-Benz in Tokyo which was also a great experience but he still felt more connected to the whole entrepreneurship thing.

What problem is Wallet Engine is Solving?
The main problem that Wallet Engine saw in the market is the cross-border small value payments, there are in most jurisdictions or in general, they’re just not possible as of now. ” For example, if someone just wants to send one dollar to a content creator in the Philippines, how are you going to do this? the person probably doesn’t have a PayPal account. Even if you use PayPal, it will cost too much to justify a donation of 10 cents or 30 cents because you will pay 50 cents in fees. it’s just it just doesn’t make sense“ said Pascal.

Wallet Engine also saw that when it comes to the content creation app and the payment infrastructure itself, most of the payment infrastructure looking outside stripe right now. “They have been designed for e-commerce payments and this is also why the current solutions for the ones for the knights like clubhouse and TikTok, they’re good first approaches but they’re not sustainable in the long term because since they implemented stripe. Stripe basically sends the money from a user to a merchant account from a version account to another user so this is already quite complicated and in there, there is already a fixed fee and the percentage fee is involved which really doesn’t enable the use case of small value tipping.“ the founder added.
The second problem Wallet Engine saw is the payment infrastructure, it is designed for e-commerce in most of the wallets that are not interoperable as of now. “It means you cannot use paper to drop up your N26 account in Germany. You cannot use it to top up your graph account. So all of these wallets, they’re kind of not interoperable with each other. The last problem is that even the remittance companies such as transferwise, uniquely don’t cater for small value transfers.“

What countries are going to be available?
The first country that’s available is Singapore. Wallet with a gig economy app and the second country they’re focusing on is the Philippines right now. “We have some business, some partnerships, and customers there which makes it a very great use case already.We are really much recovering from Singapore and expanding slowly to the Philippines, Indonesia, Malaysia, Thailand, and Vietnam.“

Who would benefit from Wallet Engine?
It has the potential to benefit both the content creators and users to send and receive micropayments with a click from any place in the world. Other beneficiaries are the applications and platforms that wish to integrate payment, tip, or donation options into their apps without having any E-money license. Wallet Engine can also provide new revenue streams to content creators, insurance firms, social media platforms, cryptocurrency wallets, and other similar platforms that have been waiting for a micropayment transfer option for a long time.

The fees that users pay, how does that work?
One of our key value propositions is that the apps can basically decide and customize their own tree structure. If the user uses a credit card then what we cannot do is we cannot evade the top-up costs there will be 2% pros being worth but the app itself can now decide if they want to pass it on to the user, do they want to pay it for them that’s all up to them. When it comes to the transfers within their ecosystem, they could say we charge 0% or 2%. Whatever makes the most sense for the business use case.

What makes Wallet Engine stand out from other Fintechs?
Goal Teller helps the smaller and medium investors to get the right advice at the right time at a lower cost. The Investment Program of Goal Teller is based on investors’ risk tolerance – offering them options that they might not have been aware of.

What are the next steps of Wallet Engine?
Right now in the face where Wallet Engine aims to launch with more apps in Singapore to prove the use case even more. Wallet Engine also set up operations for live transactions in the Philippines.
“So we are very much right now in the face where we want to grow the wallets that we are operating. The active wallets on our system and I think the main goal for the next six months would be enabling the payments or second country which is the Philippines on a larger scale.” Pascal said. 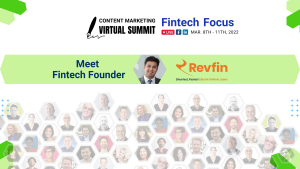 Sameer Aggarwal, Founder of RevFin, Helps People in Small Towns Get Installment-based Loans to Startup Their Micro-enterprise and Create New Stream of Income

Save your seat and get updates when the summit is live!

By signing up for Content Marketing Virtual Summit, you consent to receiving emails with Content Writing event updates and tips. You can unsubscribe at any time.